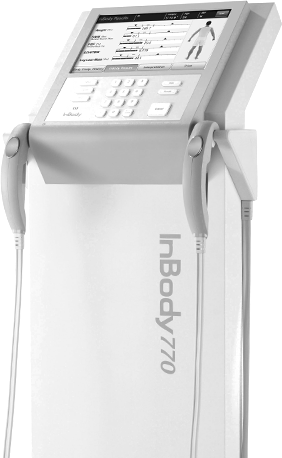 My interest in BIA took root very early in my life. This led me to conjoined research in engineering and medical streams. I reached a point where I just had to make this machine, as it could improve the quality of human life. This business, therefore, is a natural extension of the pursuit of my interest in BIA.

What is Bio-Electrical Impedance Analysis (BIA)?

InBody devices use a method called Bio-electrical Impedance Analysis (BIA) to measure body
composition, which divides your weight into different components such as lean body mass
and fat mass to assess health and nutrition... 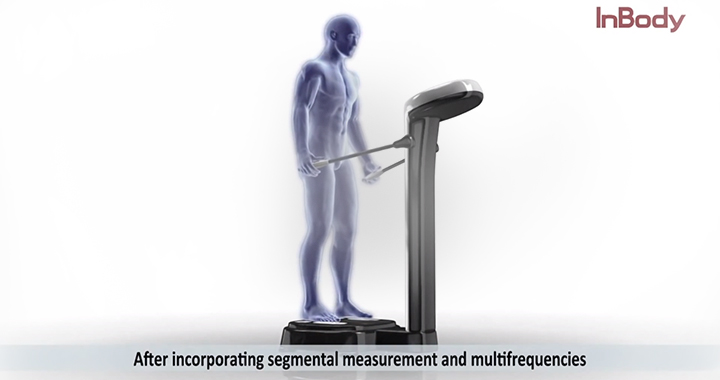 The Human Body and Impedance

The Concept of Resistance

To better illustrate how this works, imagine the flow of cars in traffic. Your car is the voltage source or current, and the highway you’re on is body water. If there were no other cars, you could zoom past the highway, just as if the human body were full of body water and nothing else, there would be no resistance.

But water is not the only element in the human body, just like you’re not the only car on the freeway. As more cars get onto the freeway, the longer it takes for you to get through the path, creating resistance. Other elements such as fat, muscle, bone, and minerals create resistance to the electrical current that is going through your body. 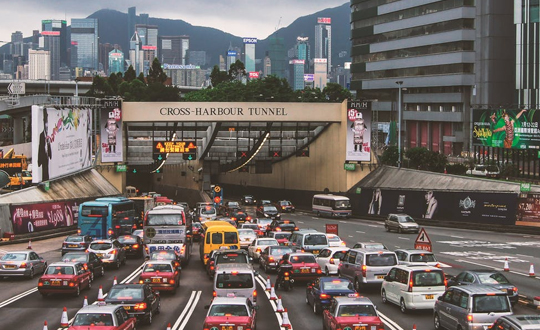 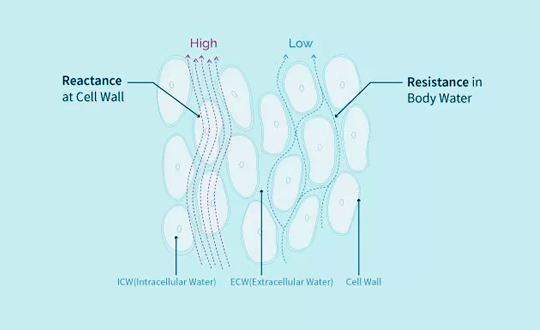 The Concept of Reactance

Reactance, also known as capacitive resistance, is the opposition to the instantaneous flow of electric current caused by capacitance. Reactance helps measure the cell’s ability to store energy and is an indirect measurement of cellular strength and integrity.

Putting It All Together

Impedance is the vector sum of resistance and reactance and is the measurement BIA devices use to determine your body composition. BIA applies a cylinder model for the relationship between impedance and a human body.

By knowing the impedance and the length of the cylinder, we can measure the volume of total body water.

In the human body, the same formula applies, where the length would be the height of the person. Therefore, we can calculate the volume of the total body water just by knowing the impedance and the height of individuals. This is also why it is imperative to have an accurate height measurement. 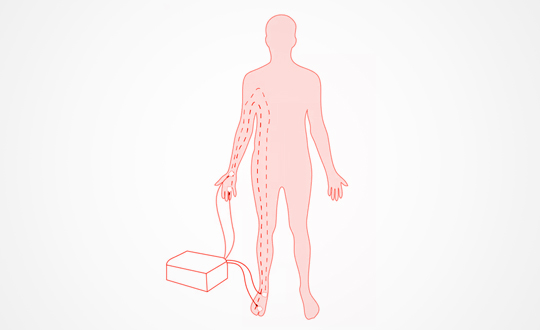 InBody’s medical-grade body composition analyzers rely on four pillars of
technology to give you extremely accurate and precise BIA results that
are highly correlated to gold-standard methods. 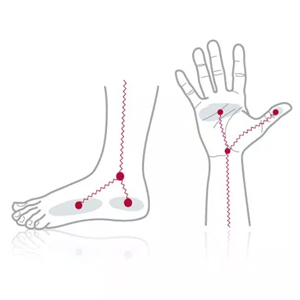 Leveraging on the ergonomic characteristics of the human body, when an InBody user holds around the hand electrode, current flows from the electrode and voltage is measured at the electrode touched by the thumb.

This works the same way the foot electrode, where current flows from the front sole electrode and voltage is measured at the rear sole electrode. Measurement is always taken at the ankle level.

The 8-point touch electrode method using the thumb electrode is a unique feature of InBody devices that produces an exceptionally high reproducibility rate in results.

However, this method had a number of flaws:

It assumes the distribution of lean body mass and body fat across all segments of the body are constant. The shape & length of the arms, legs, and torso differ so the body cannot be seen as just one cylinder but actually as five separate parts. Since impedance is based on length and cross-sectional area, the calculation of TBW is inaccurate because each segment of the body has different length and cross-sectional area.

One of the biggest problems with the one-cylinder method is the lack of a torso measurement. The torso has the lowest length and highest cross-sectional area, which results in a very low impedance (typically 10-40 ohms). However, the trunk comprises about 50% of an individual’s lean body mass (LBM).

In other words, if the body torso is not separately measured, the body torso’s impedance could be overlooked. But as the body torso makes up more than half of our body weight, we can say that the whole-body impedance measurement ignores half of the entire body.

As the body torso contains much more water and muscles than the limbs, 1 ohm of torso impedance and 1 ohm of limb impedance can have different implications altogether. Because each ohm represents a large amount of LBM, a difference of even 1-2 ohms can lead to great error in the determination of TBW.

When using a BIA device, it’s important to find a device that actually measures the torso and measures it separately, not estimating the values of what it could be. Otherwise, the estimations are leading to large errors in total body water and in turn fat-free mass and lean body mass.

With InBody, there’s no estimating through Direct Segmental Multi-frequency BIA, which in simpler terms, simply means that each segment of your body (right arm, left arm, torso, right leg, left leg) are all measured separately at multiple frequencies.

Early BIA devices only used the frequency of 50 kHz to calculate total body water. Water is stored throughout the body, and total body water (TBW) can be divided into 2 compartments:

InBody uses multiple currents at varying frequencies to provide the most precise body water analysis. Electric currents penetrate differently, depending on the frequency. Some frequencies are better suited for measuring body water outside the cell, while others can pass through cell membranes to measure total body water.

Considering that the degree of penetration through the cell membrane differs by frequency, intracellular water can be obtained by direct measurement instead of assumption. Using multi frequencies provides much more detailed analysis of individual body composition.

By differentiating intracellular water and extracellular water, edema index and other figures can be obtained. This allows the body composition analyzer to be applied in nephrology and rehabilitation area.

No Estimations or Empirical Equations

BIA devices commonly use empirical equations to calculate a user’s body composition because most BIA devices use whole-body impedance. These equations help compensate for the lack of torso impedance measurement by plugging in empirical data such as age and gender.

Empirical equations can give a somewhat accurate estimate of a user’s body composition if the user has a typical body shape for their specific age, gender, and ethnicity. These equations take into consideration that as a person ages, their muscle mass will probably decrease and that males tend to have more muscle mass than females.

However, plugging data into an equation does not mean that your specific body composition is being measured. What if you’re an elderly female bodybuilder? In reality, you probably have more muscle mass than others in your age and gender group, but the empirical estimations will calculate otherwise

The problem with empirical estimations is that you’re put into a preconstructed equation that estimates what your body composition. Your results are always predetermined, regardless of your actual body composition.

InBody does not need to use empirical equations to calculate your results because InBody body composition analyzers measure your entire body into 5 cylinders, giving you the torso measurement separate from the rest of the body. Your body composition is determined solely by using the impedance values found from each of the body’s five segments and your height.

You will get the same body composition measurements for muscle mass, fat mass, etc. whether the user is entered as male or female because Inbody measures you for you.

How can you determine if your BIA device uses empirical estimations? Try testing a user twice back-to-back by switching the age or the gender.

If the device yields two different results, it uses empirical estimations. These BIA devices are programmed to always output data that shows that males have more muscle mass than females– regardless of what is actually true.

Thank you. We have received your feedback.